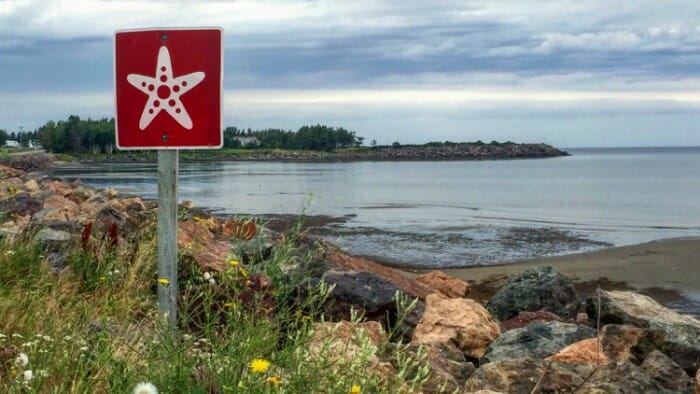 I don't think I've ever met a culture so fiercely determined to celebrate its history and so modern in how they do it.

The Acadians of New Brunswick are fully present and not to be missed. This New Brunswick road trip is your perfect introduction to Les Acadiens.

Despite the British attempt to remove them from British North America in 1755 a few remained and eventually gathered in Caraquet, the unofficial capital of Acadia. Their population grew and now spreads along the New Brunswick's east coast. You can feel the Acadian presence in the French you hear (with an accent that I didn't find difficult), the food you eat, the music you listen to and the activities you enjoy.

As I continue to travel this year I find myself telling the stories from this August trip again and again. For a trip through a seemingly quiet rural countryside, it has certainly left me with many stories and anecdotes to pass along to you. Here I want to share my road trip itinerary with tips and photos. 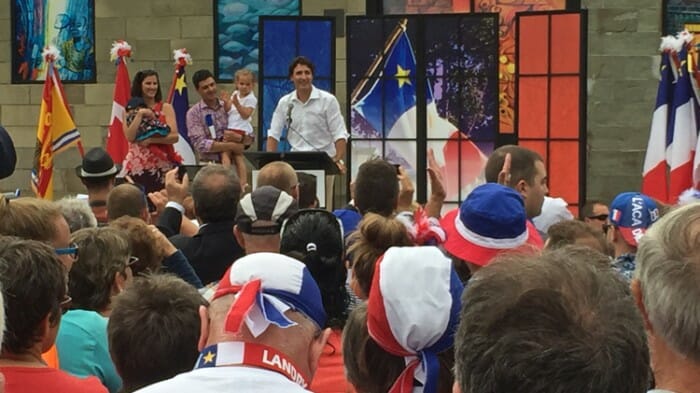 Canadian Prime Minister Justin Trudeau joined the festivities for the Tentamare in Caraquet on August 15th. 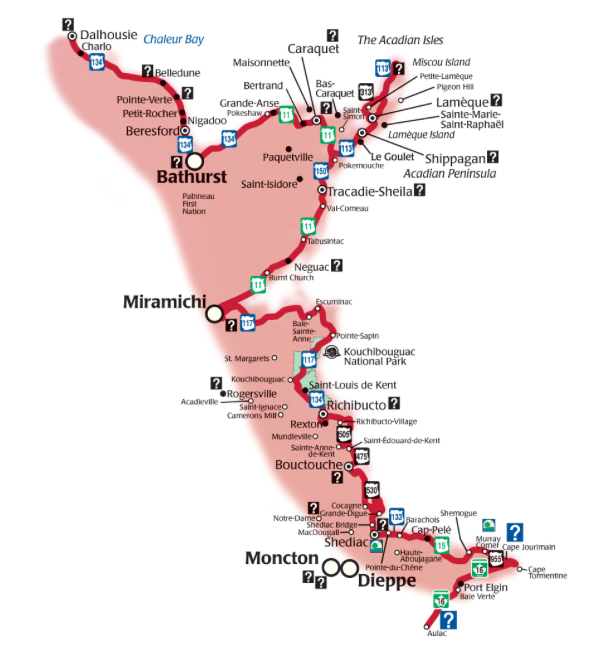 Get away from Moncton early so that you have time to: 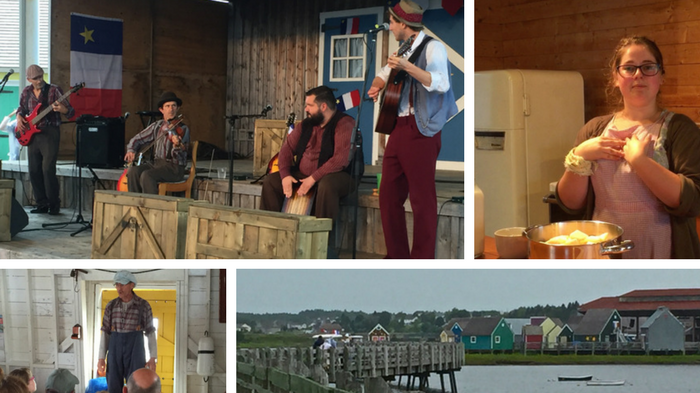 Le Pays de la Sagouine. They have entertainment many times during the day and there are characters from the novels in many of the homes. It's a lot of fun! From top left clockwise: an Acadian band playing great traditional tunes, the fictional niece of la Sagouine (the washerwoman) who was teaching traditional cooking that day, a view of the island from the boardwalk and a fisher explaing, with great drama and humor, the various shellfish to be found in the area, how to catch them and how to eat them. 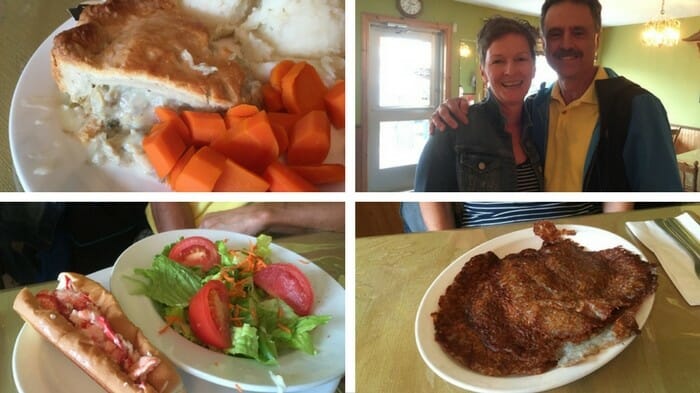 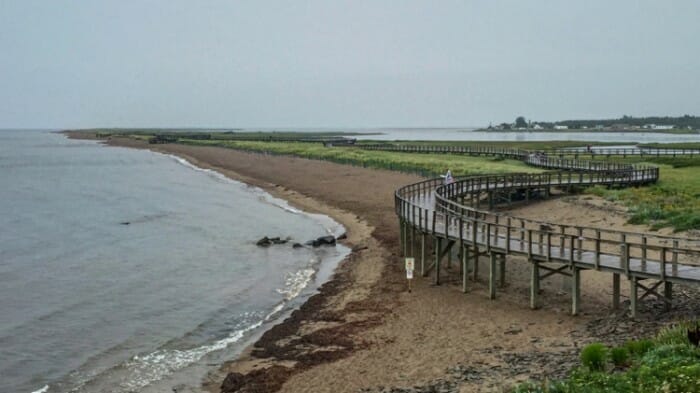 The Irving Eco-Centre just north of Bouctouche. It happened to rain when I was there otherwise it would have been a beautiful walk along the boardwalk.

The Miramichi River looms large in my mind. My late husband's family lived mostly in New Brunswick and this river was always referred to as the Mighty Miramichi. It's a grand river and the focus of leisure activities for locals and visitors alike. 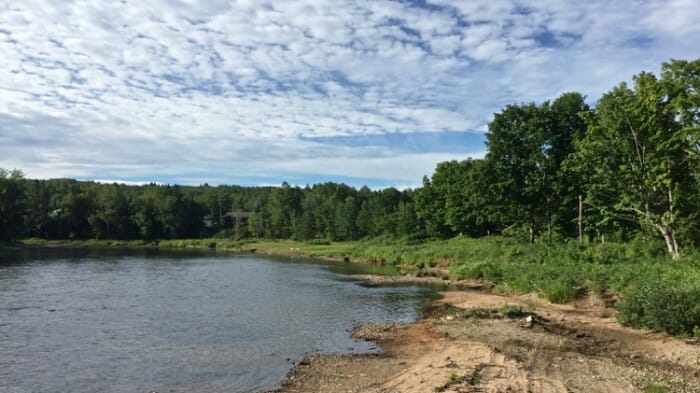 Upper Oxbow Outdoor Adventures is located on The Little Southwest Miramichi not far from the town. 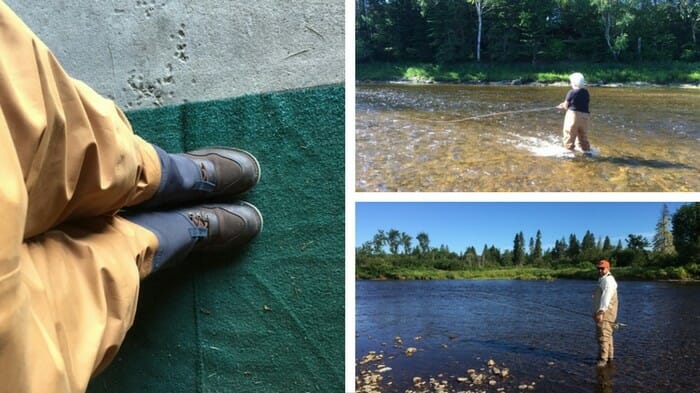 Fly fishing on the Miramichi. Upper Oxbow Outdoor Adventures provide gear, the guide and the skills. 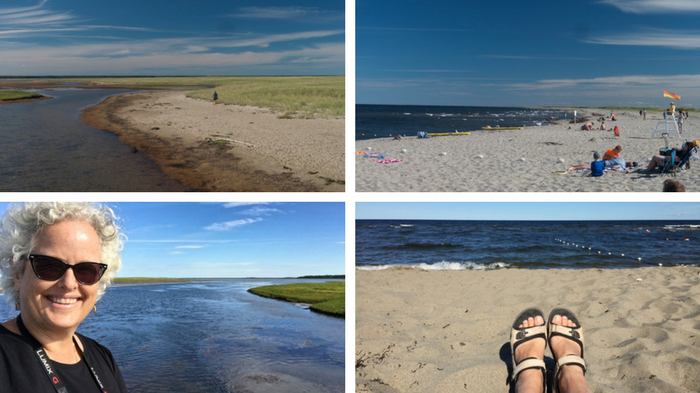 Kouchibouguac National Park on the east coast of New Brunswick. From top left and clockwise: sand dunes and marshes that go on for miles, the warmest ocean beaches north of Virginia, my feet in the sand and me! 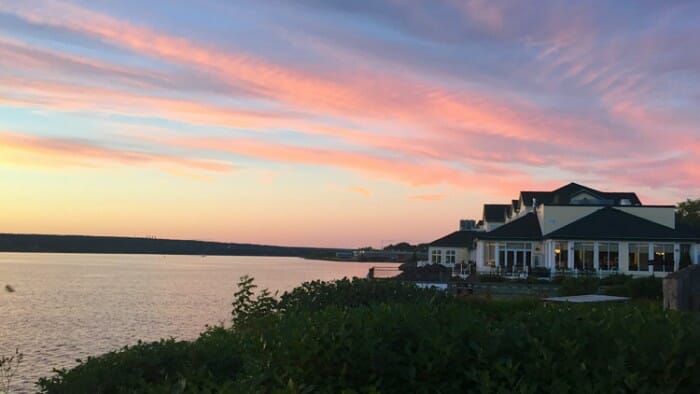 The Rodd Miramichi at sunset. Have dinner in their restaurant which has floor to ceiling windows overlooking the river (seen in photo) for the best views of the sunset.

Acadian Coastal Route Day 3 – Driving to the end of the road and Caraquet's historic village. 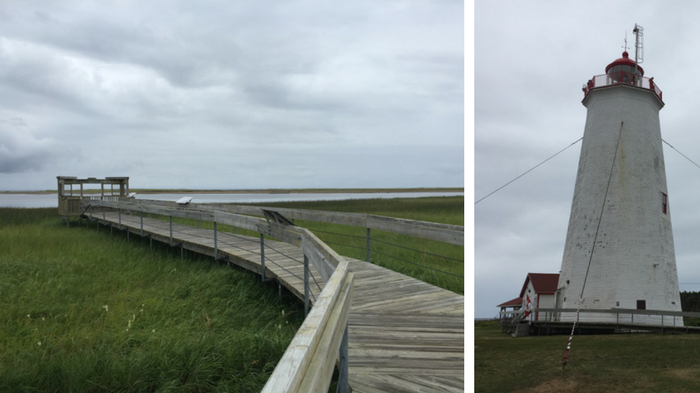 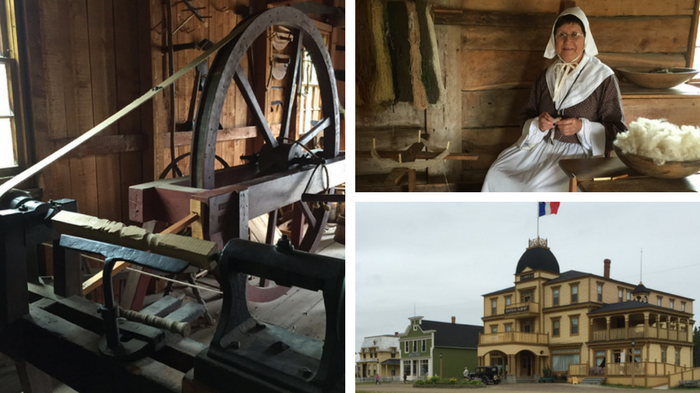 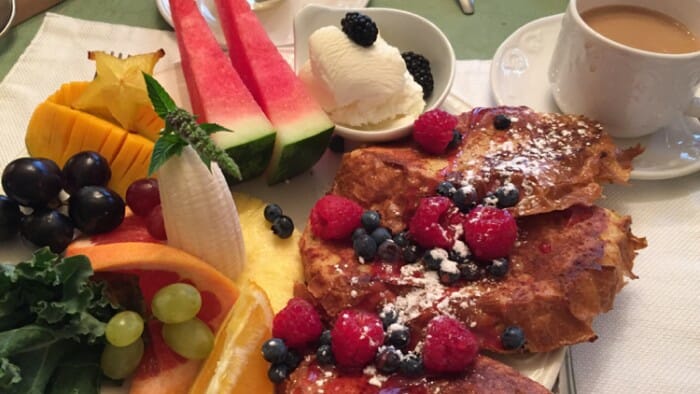 The breakfasts made by Alain Boisvert of Gîte “Le Poirier” B&B are nothing short of spectacular.

For me, day 4 was August 15th, the big day for the Festival Acadien de Caraquet. However, there was much I could see before the festivities started. 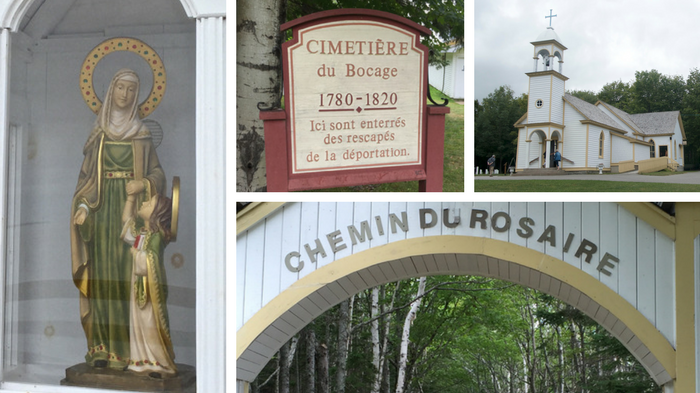 Sainte-Anne-du-Bocage was built in 1840 on the site of the first church in Caraquet. 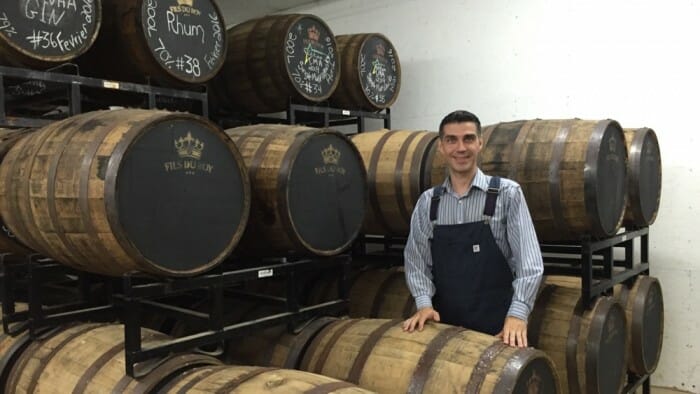 I went to the Fils du Roy Distillerie in the morning. You can read about this amazing distillery and the most passionate man I've ever met in Learning from Travel: A Lesson in Following Dreams. 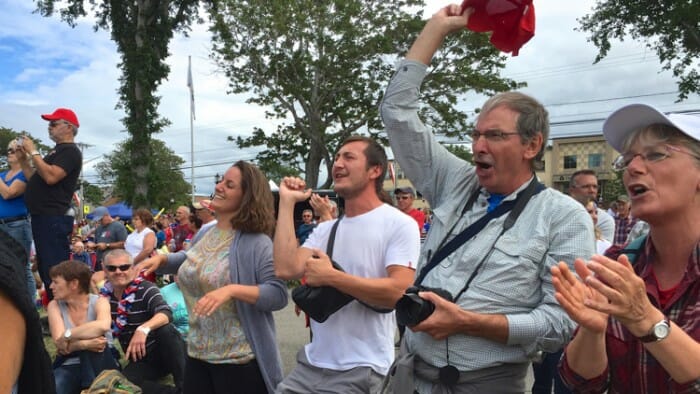 There were live, outdoor concerts all day on August 15th for the Festival Acadien de Caraquet. 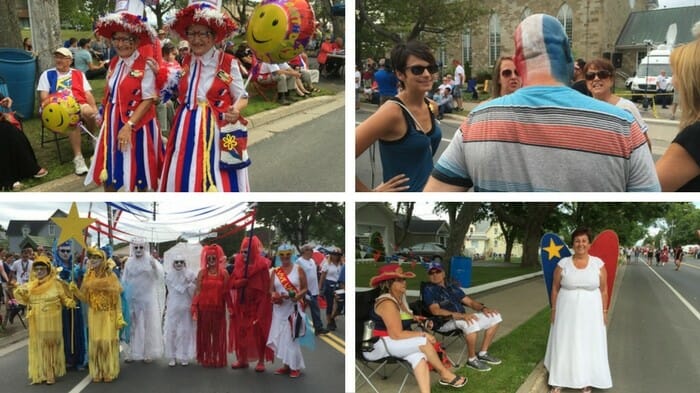 Everyone dresses up for the Tentamare.

I was concerned that after the festival the road back to Moncton/Shediac would be busy but it wasn't bad. I arrived in time for to check into my hotel and get to the lobster cruise in time. 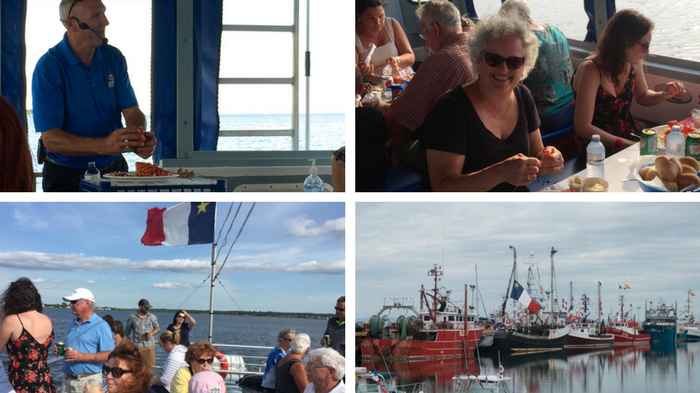 From top left and clockwise: Ron showing us the proper way to eat a lobster, me eating one, the Shediac harbor and a pic from the upper deck of the boat.

So there you have it, my five-day New Brunswick road trip itinerary. It truly was a fantastic time. It will be on my recommended solo road trips post I'm planning for our series of 2017 trip planning posts.

This week-long road trip was supported by Tourism New Brunswick. It was fantastic! I have so much to tell you. As always the opinions and experiences are my own.