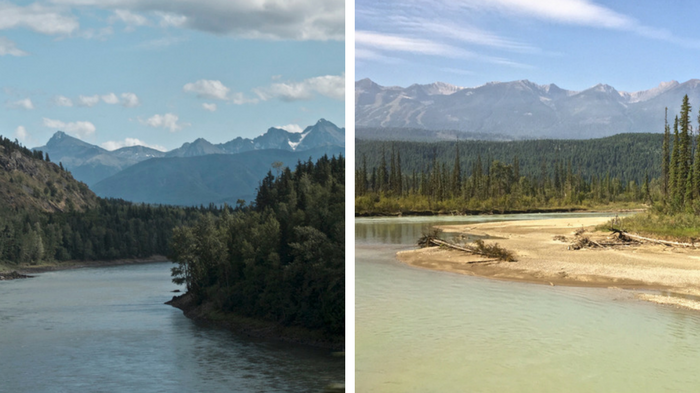 This is a tale of two trains. In the image above, on the left, is a shot from the cheap VIA Rail experience and on the right is from my luxury Rocky Mountaineer trip. Further down you’ll see images from both trips and then a comparison of costs and features of the two train experiences.

Train travel in British Columbia is a spectacular experience. This is true whether you go on the cheap or for luxury. In this post, I look at VIA Rail vs. the Rocky Mountaineer train experiences so that you can decide how you want to spend your travel dollar.

The thing about train travel in British Columbia is that it's about the scenery. You can't say that for all train travel. But you can in B.C. And that's why you have a decision to make.

Do you want to add luxury (and price) to your train experience or do you want to go the budget route and save money for another trip?

VIA Rail covers the northern route across the province from Prince Rupert to Jasper. It's your budget option coming in at Cdn$139.00. The Rocky Mountaineer covers the southern route from Banff to Vancouver and is your luxury choice for Cdn$1,700 (or much more as I went for the lowest price they had).

The food, the service, the people are quite different on each train but the landscape is almost comparable with the southern route having more variety.

Below you will find a comparison of the VIA Rail and the Rocky Mountaineer experiences. I share with you the experience, service, and scenery I enjoyed on each train journey across British Columbia. I hope that it will help you decide which is best for you. This is a fairly long post so to help you get around here are links to:

This is the third post from this trip. You may also want to read Western Canada Itinerary: Top Things to See and Do and Top Tips for Prince Rupert: The Best of Small Town Travel. 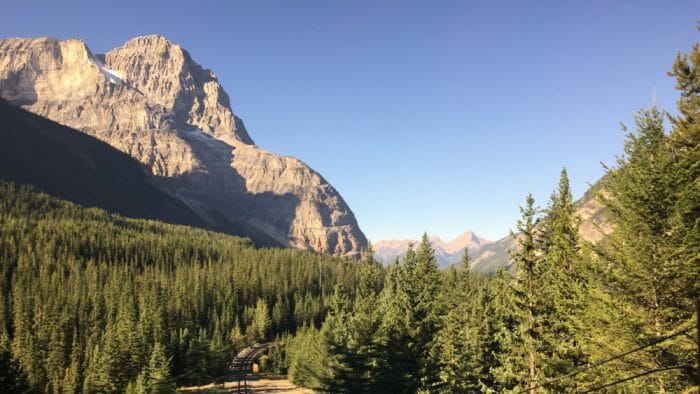 The Rocky Mountaineer runs trains along multiple routes in Western Canada however it is best known for its Vancouver to Banff corridor. It is most definitely a full-service, luxury train experience. For many of my fellow passengers, it was a trip of a lifetime for which they had planned and saved. Cdn$1,700 is the base price for two days. It includes breakfast and lunch both days and your accommodation in Kamloops. The food on board is very good as are the wines and spirits which flow liberally. They also handle your luggage for you, making the whole experience very comfortable. 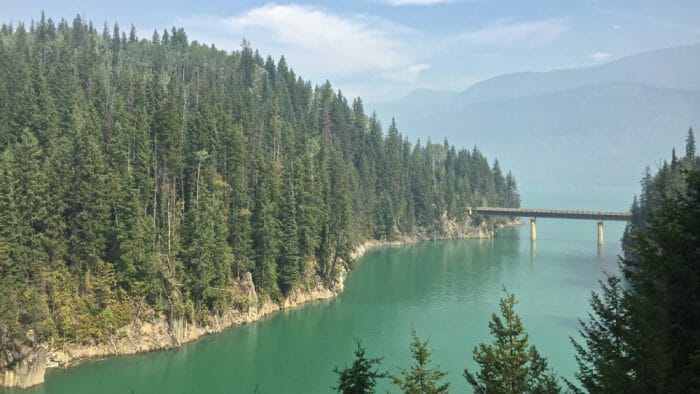 The emerald color of the lakes is a result of rock flour which is carried into the lake by meltwater from the glaciers. 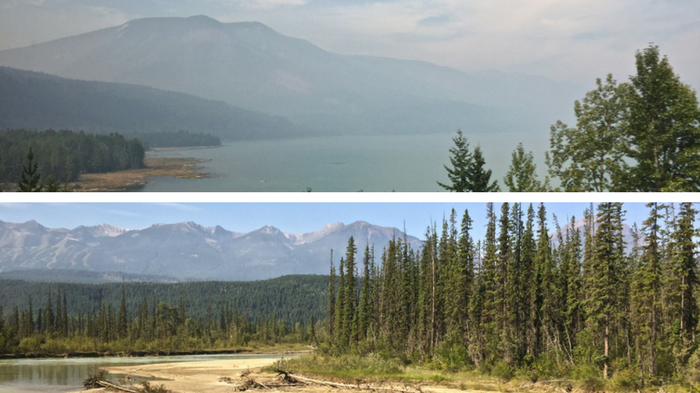 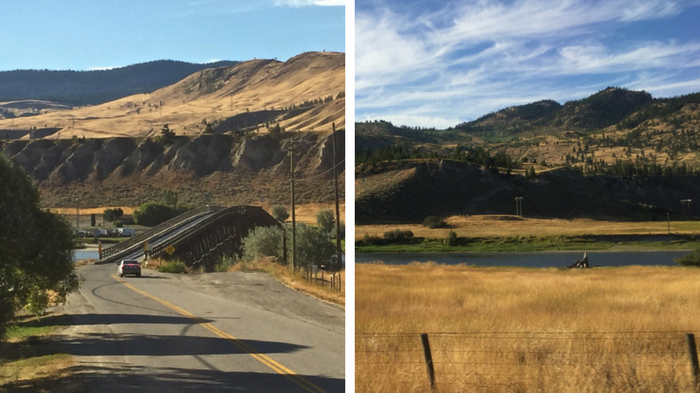 The semi-arid country is near Kamloops, the location of our one-night stop. You can see in the distance in the photo on the right that there are many hoodoos (rock spires) in the area. 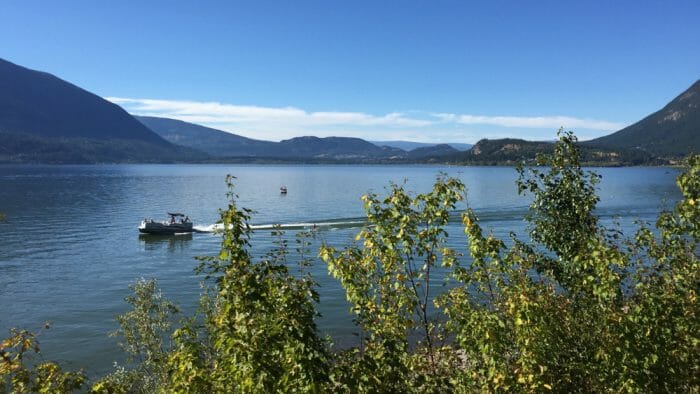 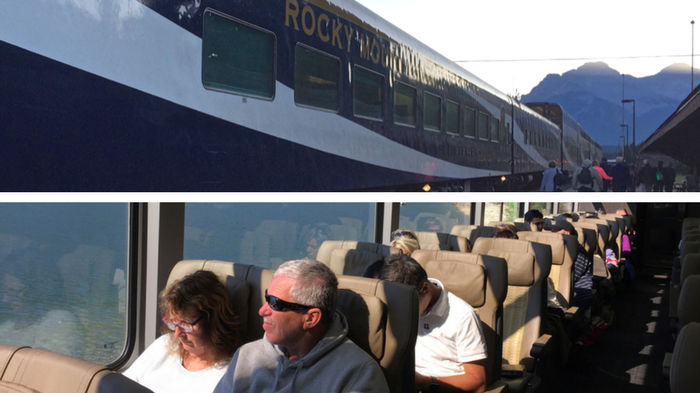 The windows on the Silverleaf class of the Rocky Mountaineer are large and wrap up and overhead as you can see in the lower photo. 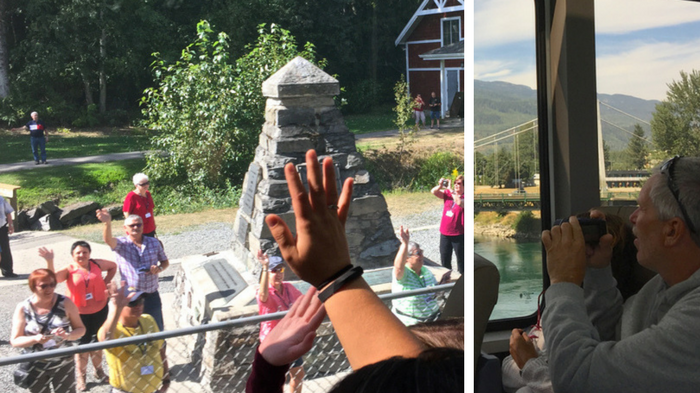 It's common to have people along the route waving to the train. 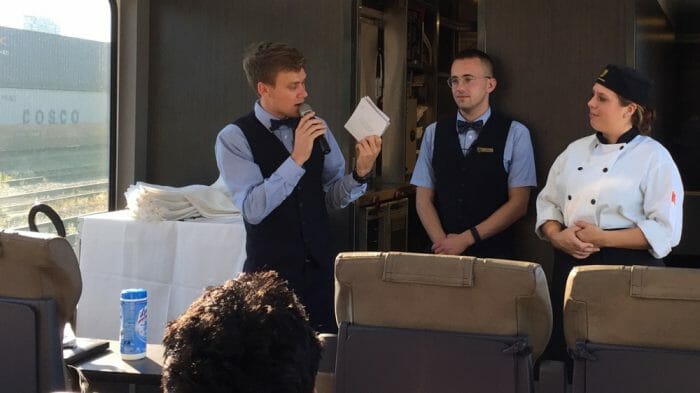 The team that took care of our car. The fellow in the middle was the straight man, the one on the left quite the card. It was our chef's first trip so she was a bit on the quiet side. 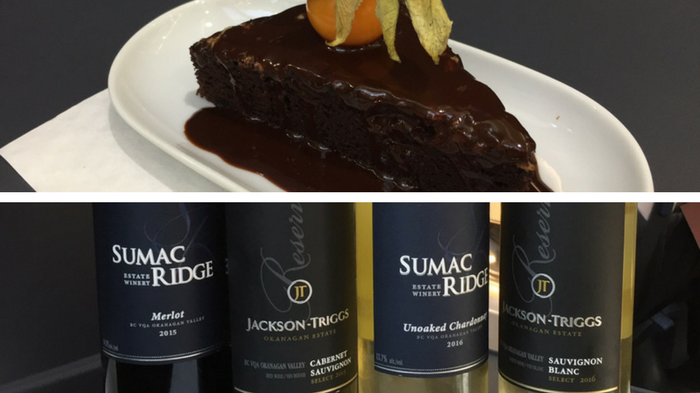 The food and drink on the train are very good. I'd say about the level of business class on a plane.

VIA Rail: Prince Rupert to Jasper (A Great, Cheap Alternative)

The trip on Via Rail was definitely more basic than the Rocky Mountaineer. Then again, it cost Cdn$1,561 less so one would expect that to be the case. That said I found it to be a great experience.

On past trips I've taken, the Dome car was accessible to economy passengers however on this route that is not supposed to be the case. It is held for touring class passengers. Fortunately, the train was not full. Plus, the touring class car windows are very good so the dome car was not being well used. By the end of the first day, staff was inviting economy passengers (there were only about twenty of us) to the Dome car. I love it when people do what feels right as opposed to following rules strictly.

In practical terms, I brought most of my food with me, booked my own hotel (which adds about $100 to the cost of my trip) and schlepped my own bags to the hotel and back (by taxi at night which cost about $10, and on foot in the morning). The coffee was surprisingly good on the train and there were drinks, snacks, and meals to purchase if you wanted.

Tip: Sit on the south side of the train as you leave Prince Rupert. Sit on the north side as you're approaching Jasper. 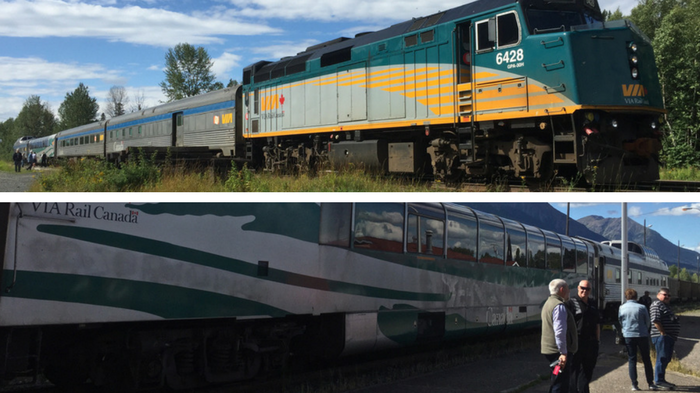 The VIA Rail train makes three or four stops along its route which is a chance to stretch your legs and chat with different passengers. 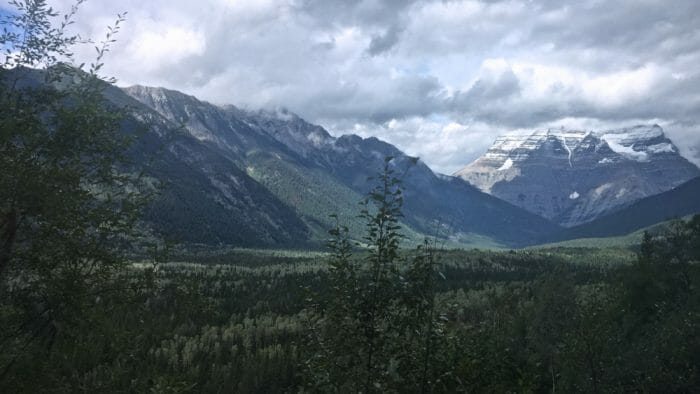 Mount Robson (on the right) is the highest peak in the Rockies. It is also so high that it has its own weather system so the peak is often lost in the crowds. 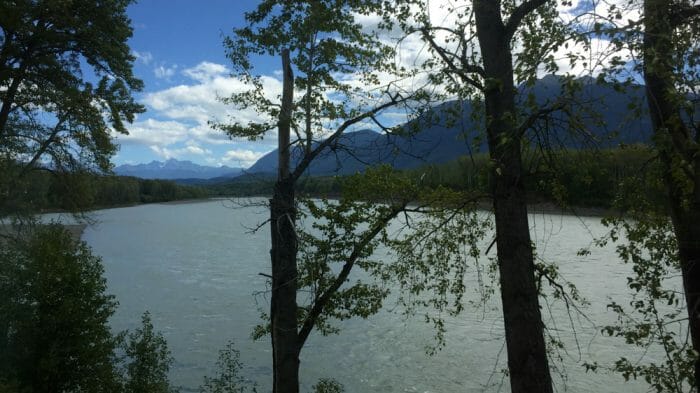 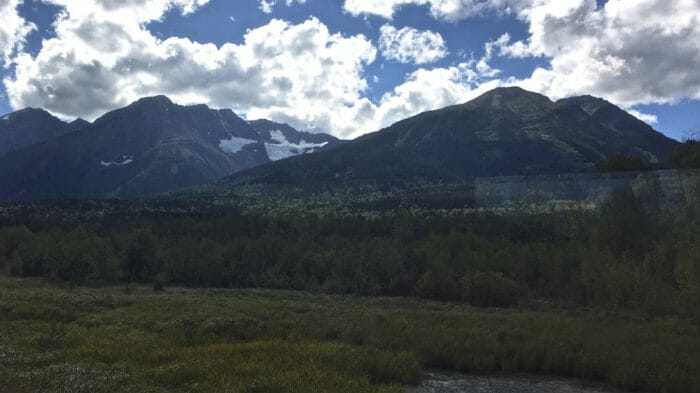 Glaciers in the distance. 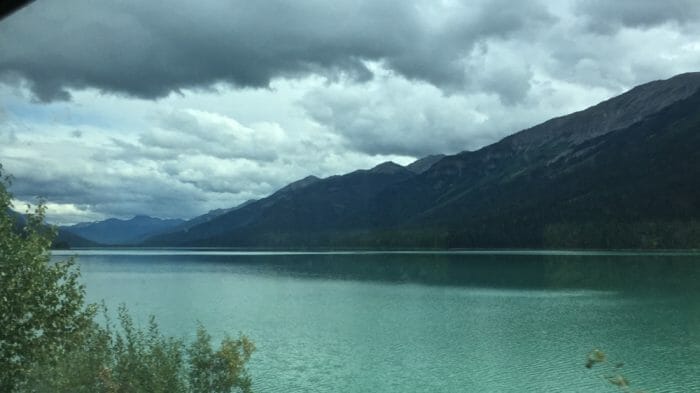 Moose Lake outside of Jasper. 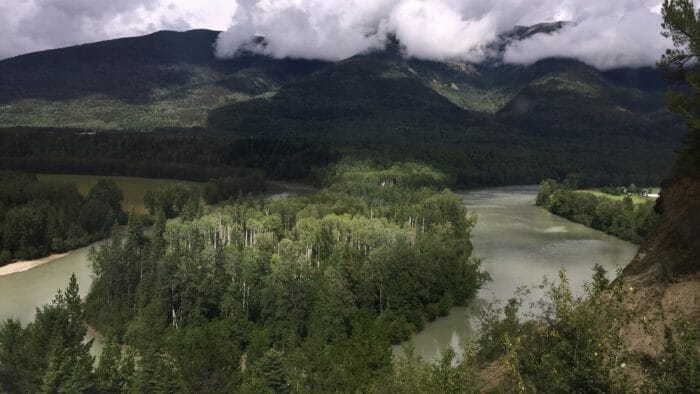 I wish I could confirm which river this is. It snakes through the mountain pass that the train takes. 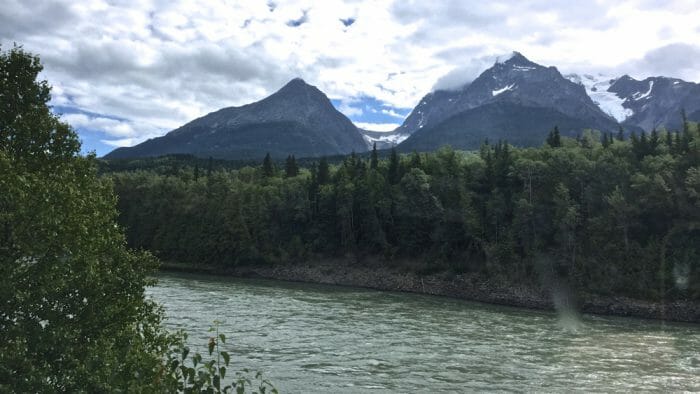 That's a glacier in the mountain on the right. 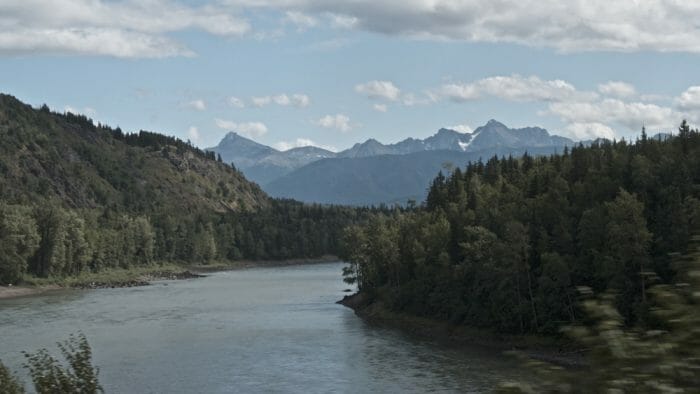 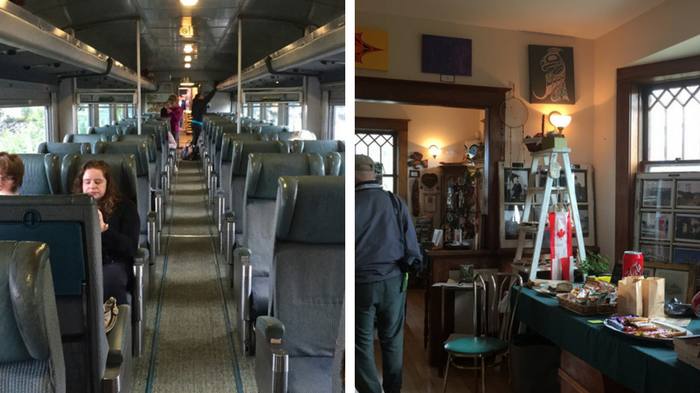 The Via Rail experience includes stops along the way which give you a glimpse of smaller towns. On the left is the economy class car. ON the right is a cute little shop at one of the small-town stops. 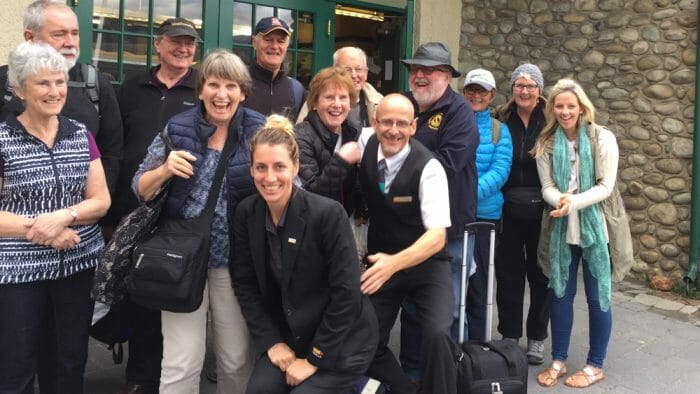 The Australian tour group I met on VIA Rail and the two person VIA team. 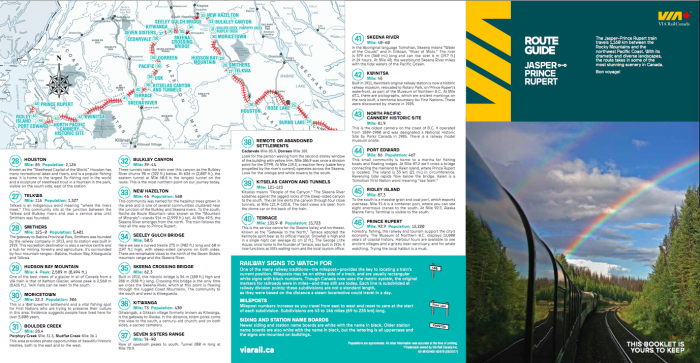 Look for a brochure for mile by mile information on the trip online. On board the Rocky Mountaineer you receive similar information.

Comparing VIA Rail and the Rocky Mountaineer

You've seen a comparison of the experiences above. Now here's are the details comparing the VIA Rail and Rocky Mountaineer in terms of food, comfort, services, and more.