You are here: Home / How to Travel Alone / Jet Lag – Worst Case Ever 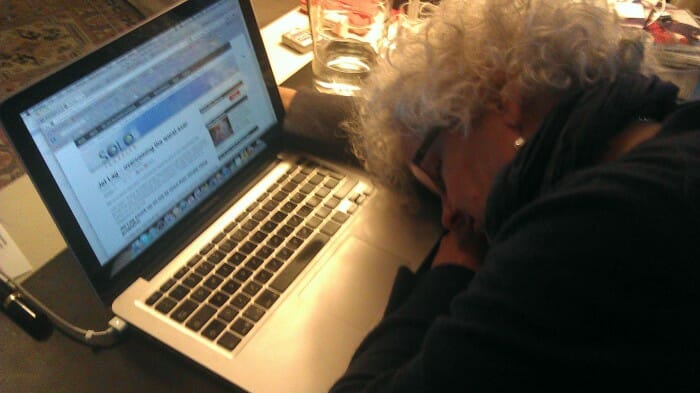 Yes, I wasn't the most productive for the first week back from India.

With all the travel I have done, I never knew how bad jet lag could be - until I returned from India.

LA to London - 8 time zones. No problem though I used melatonin to help with that trip. Plus I went straight into three days of meetings and networking when I landed.

Toronto to Amman, Jordan - 7 time zones and I was a little tired but nothing that could interfere with the thrill of exploring that country.

Ok, an exaggeration but it was bad.

Some people proudly say that they never get jet lag.

I say that they haven't gotten jet lag yet.

It can happen to anyone, even travelers who regularly fly across multiple time zones without any trouble. You may not experience it for years and then suddenly, for  some strange reason, on one trip, it will happen. Just read the almost 100 comments below and you'll learn all about seasoned travelers suddenly struck by jet lag.

The Mayo Clinic describes jet lag as a sleep disorder. I experienced it as much, much more. It wasn't just a matter of being sleepy at the wrong time. I actually felt sick. So sick that I went to the doctor to ensure that I hadn't picked up a bug or parasite while traveling. I was totally messed up by jet lag.

According to the Mayo Clinic it takes "about a day to recover for each time zone crossed." Yes, but that's for the average traveler. Me? I travel all the time. This rule of thumb couldn't apply to me. Well, it did. I crossed ten time zones and on the tenth day I finally started feeling a bit better. However, it took longer still. It was a good three weeks before I really felt somewhat normal.

Jet Lag is the result of messing with our circadian rhythm. As the website of the UK's National Health Service says your "biological clock is usually synchronized with your local time so that you feel hungry in the morning and sleepy in the evening." By shifting your day dramatically within a very short period of time (overnight), we experience the effects of jet lag. The NHS offers 19 symptoms. I had eight of them including:

The American Academy of Sleep Medicine has a few recommendations for dealing with jet lag.

It seems to me that these are pretty logical if your jet lag problem is sleep. Follow this advice and you'll shift your clock and be sleeping through the night on schedule in no time.

But if the jet lag goes beyond sleepiness to you feeling ill you need to work harder at a recovery. If you have serious jet lag, I offer you my sympathies and further recommendations.

As you can see from the dozens of comments below, you are not alone. If you have other suggestions please add them to the comments.

I've never had jet lag as bad as I had it back in 2012 again. So please, don't let one bad experience interfere with your travels. Here are some posts you may want to read for inspiration.

Some of the more popular categories on Solo Traveler

Tips for Saving Money for and as You Travel