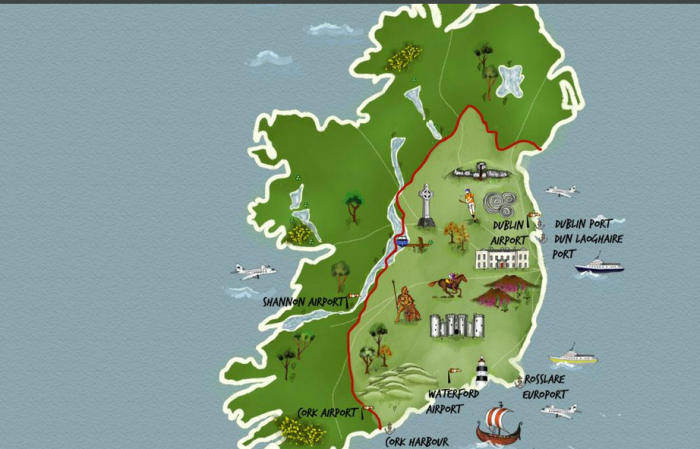 Ireland's Ancient East covers a lot of territory as shown in the light green on the map. This post covers some of the most ancient of the ancient. Loughcairn and Tara, both in County Meath.

Deciding where to go in Ireland is a serious challenge. But if you're interested in history, Ireland's Ancient East should be on your itinerary.

If you go west, people will say you should have gone south. If you go south, they'll say east. Really, it’s such a beautiful country that it’s difficult to decide what direction you should choose for your first experience there. When faced with too many options, I choose a trip theme.

If history is your theme in Ireland, go to County Meath, where much of Ireland's most ancient history can be traced.

Exploring the highlights of Ireland's Ancient east will take you off the beaten path. Without too many tourists in your way, you'll discover Ireland in a whole new way. Below are pictures of Loughcrew and Tara. They can both be enjoyed in one day. To take in all eight highlights of the area you'll need at least three or four. 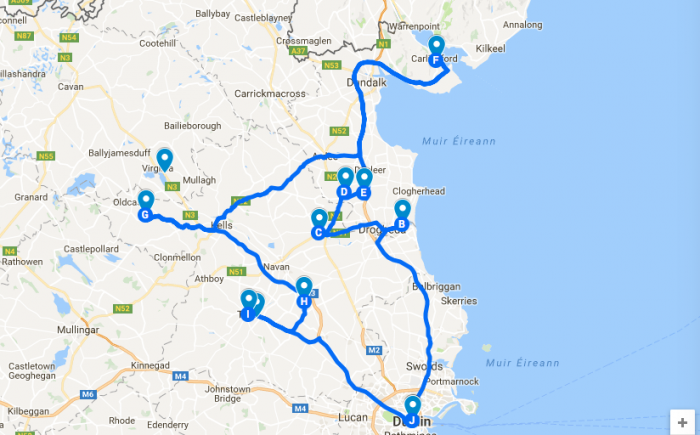 Ireland's Ancient East. I produced this in Google maps to give you a lay of the land I covered. 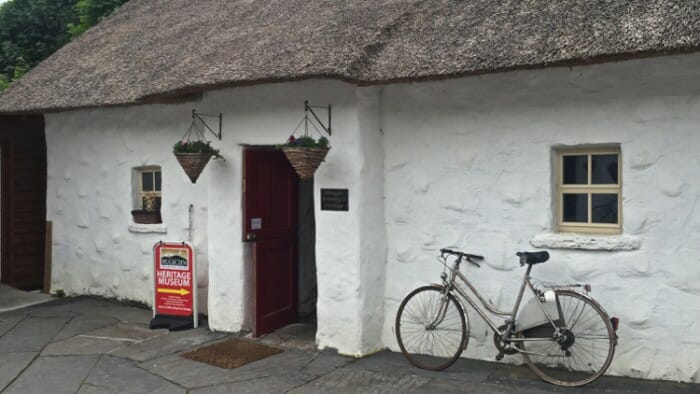 This cottage at Loughcrew is a tiny museum that tells so much. Built in the 1700s, it was occupied by the same family until 1966. It has no running water and no electricity.

Loughcrew is part of Brú na Bóinne, a world heritage site. Brú na Bóinne is a series of ritual sites (often cairns, which are man-made hills as burial sites) built around the river Boyne about 5,000 years ago. The best known and most popular of the sites is Newgrange. It is also the most developed and receives busloads of visitors. Not far from Newgrange is Loughcrew, a cairn up on a hill with a tearoom and tiny house museum near the parking lot. A half hour walk up the Hill of the Witch to Cairn T (the cairns are lettered rather than named) and you're there. Like Newgrange, it shows the engineering, architectural, and astronomical ability of the prehistoric people who built them. 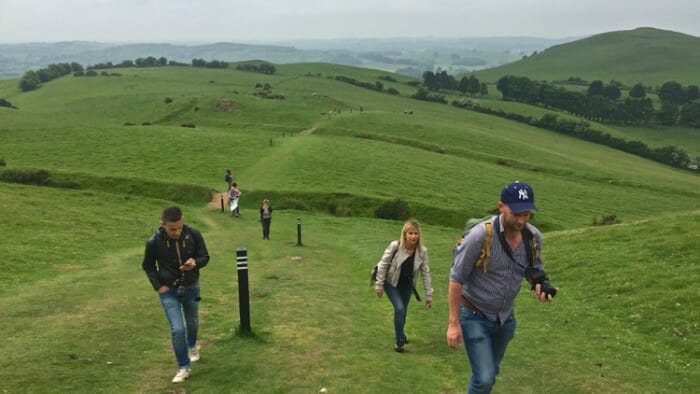 Climbing Hill of the Witch to Cairn T 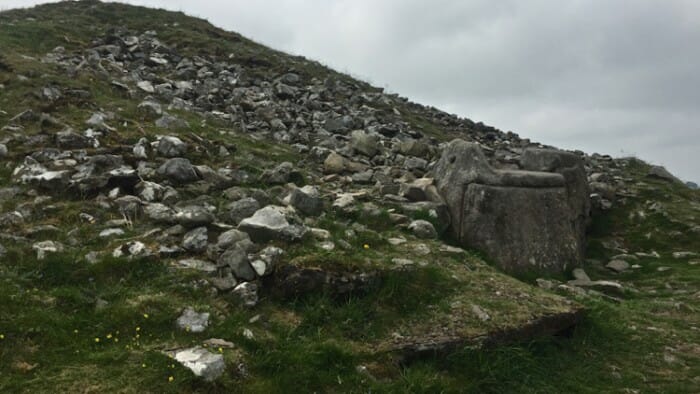 The Hag's Chair is on one side of Cairn T. 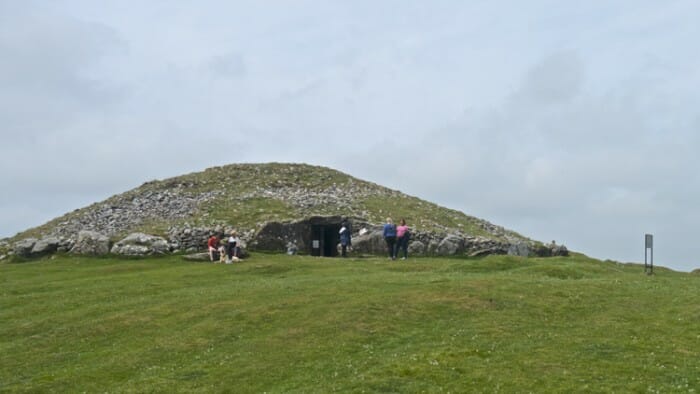 Cairn T from a distance. 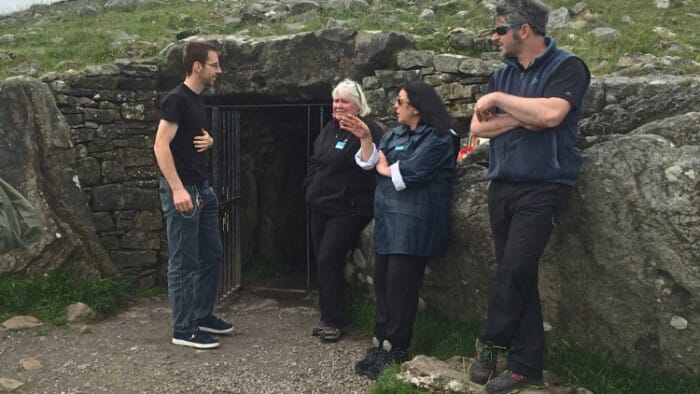 The entrance to Cairn T 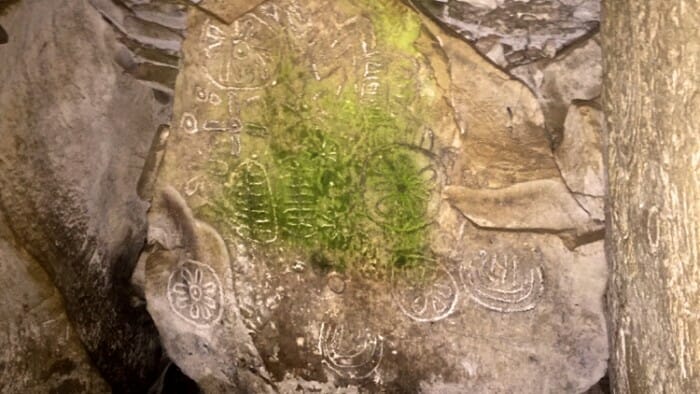 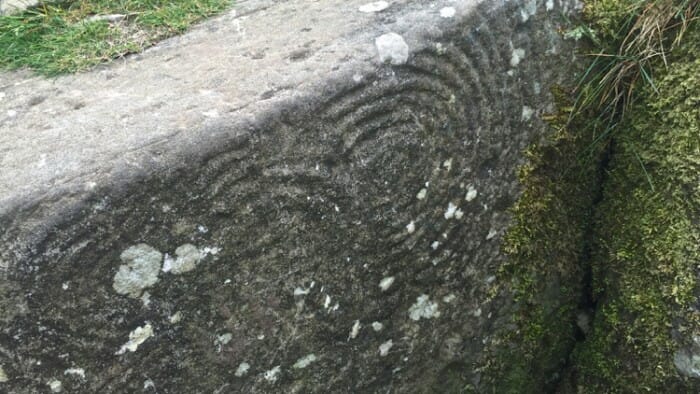 There are more stones with symbols in the area. 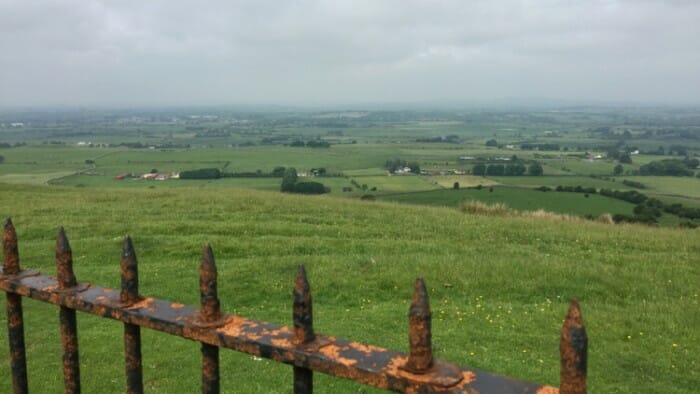 Beautiful views in all directions at Loughcrew.

Tara, circa 2500 BCE, is just 30 minutes from Loughcrew. It was the seat of the Celtic Kings of Ireland from the 3rd century until 1022.

After visiting Tara's interpretive center in the church to see a short film on its history, you walk up a relatively gentle hill to the Mount of the Hostages, which is a passage grave with carvings on the inside somewhat similar to Loughcrew. The Stone of Destiny, which helped confirm the next King is believed to have been originally located on the Mount of Hostages. The stone was moved to the top of the Royal Seat, another hill, in the early 19th century. There are also two ring-shaped earthworks that interlock forming a figure 8, or the symbol for infinity, which can only be imagined from the ground. Aerial shots show them well. 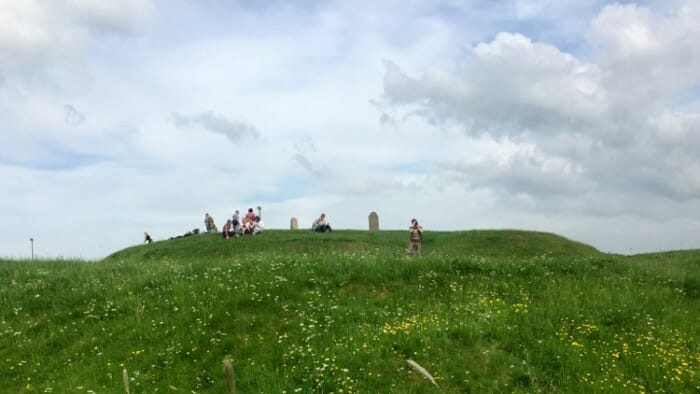 View of the Royal Seat at the Hill of Tara. 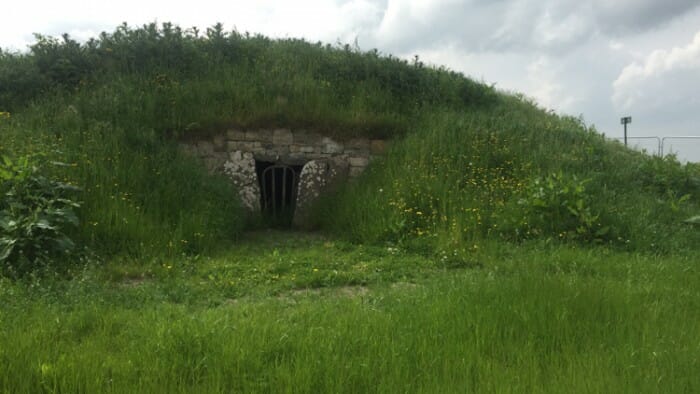 Mount of the Hostages. 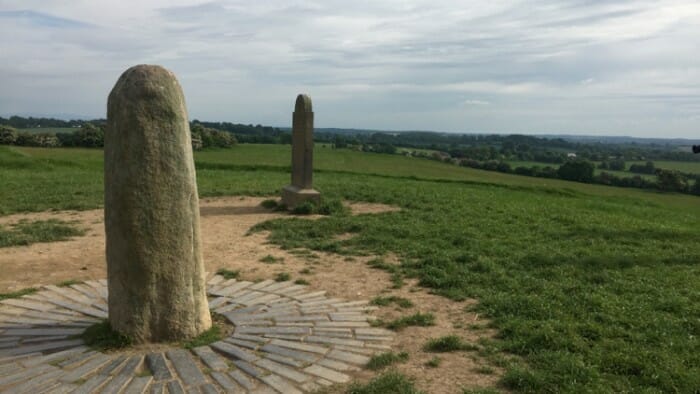 Stone of Destiny is in the foreground. The legend says that when the rightful heir to the throne touched it the stone would roar. 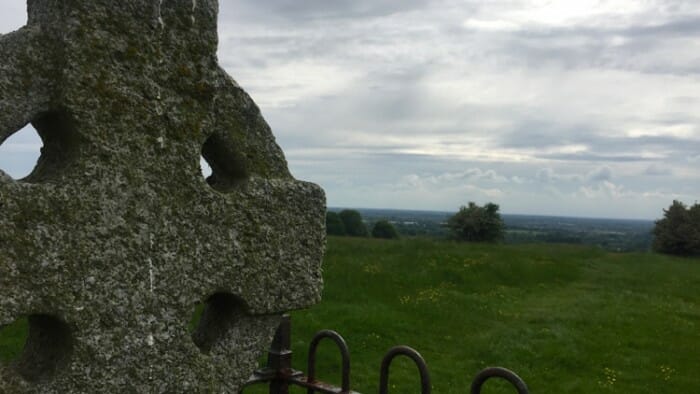 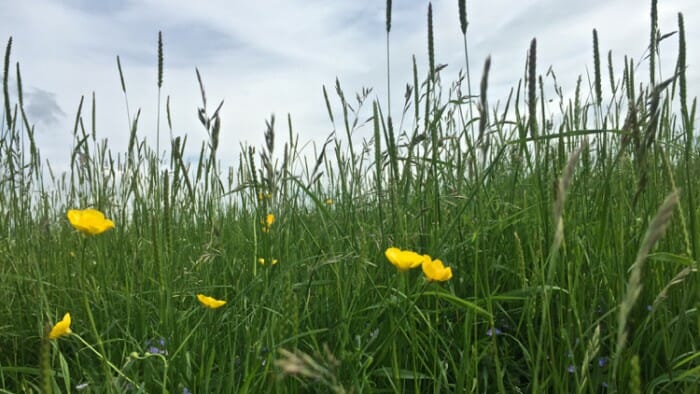 Take some time to lie in the grass. You're on vacation, after all.

Beaulieu House & Gardens. I often come upon House Museums to visit but rarely, perhaps never, have I had the chance to visit a home that could be a museum but continues to be a home. Beaulieu House & Gardens is currently lived in by the eleventh generation of the Tichbourne family. Situated on the river Boyne, the house is a rare survivor of the Artisan Mannerist style. It has a fantastic walled garden and a fascinating history. It's well worth the visit. 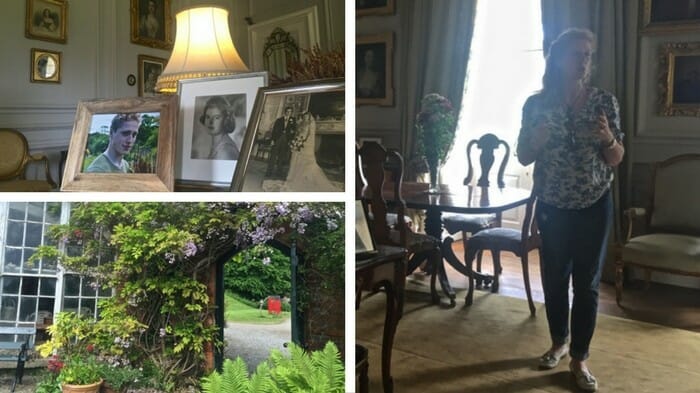 The tour I was on was conducted by the lady of Beaulieu House. Wasn't I lucky?

Slane Castle. Historically, Slane Castle has a connection to the Battle of the Boyne. More recently, it's been known for some of the world’s biggest rock acts, including the Rolling Stones, Springsteen, and U2 choosing to stage their shows in the castle's grounds natural amphitheatre. 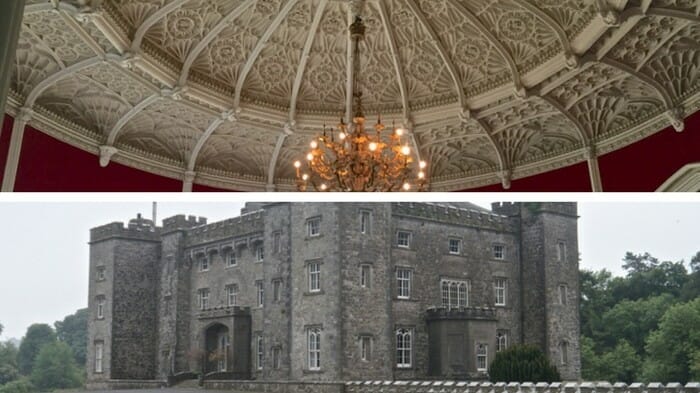 A view of the castle from the outside on the bottom. The stunning red room of Slane Castle above.

Monasterboice. I love a good graveyard and Monasterboice is exceptional. It was an early Christian settlement founded in the late 5th century by Saint Buite and was an important religious center until the establishment of Mellifont Abbey (see below). The Muiredach's High Cross is 5.5-metres high, goes back 2,000 years, and is in exceptional condition. 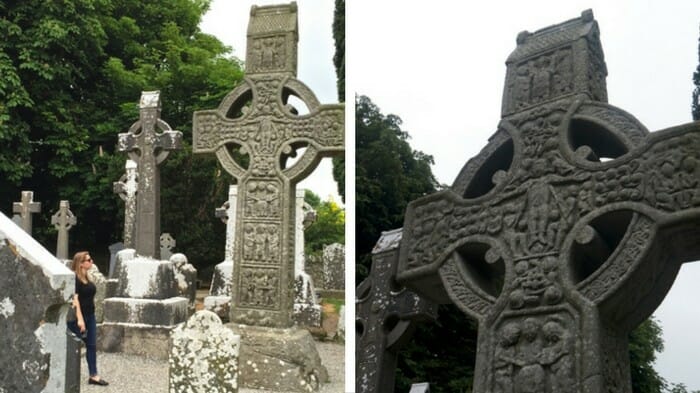 As you can see, the high crosses are towering.

Melifont Abbey. The Melifont Abbey was founded by the Cistercians in 1142. Its ruins include a chapel and church and a most unusual feature, an octagonal Lavabo (a basin used in Roman Catholic rituals for the celebrant’s ritual washings of hands) c. 1200. The Visitor Centre houses an exhibition on the work of masons in the Middle Ages. If you seek out medieval ruins, this is the place for you. 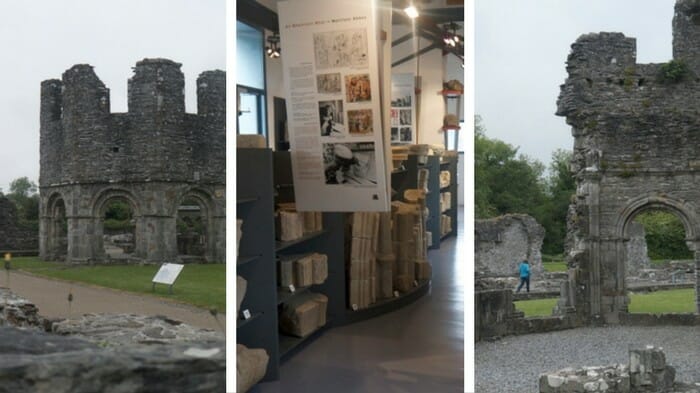 The ruins of Melifont Abbey.

Carlingford Lough – Carlingford town has Medieval sites including King John’s Castle, The Mint, Tholsel, and the historic town walls. It's a charming little town with pretty shopfronts and from my experience, the place to eat is PJ O Hare’s. It's not for the food that you want to eat there, but for the fun. When I was there, Henry Mac, a local and regular at the pub, was performing a wide range of Irish music and old Rock'n Roll that anyone could sing along to. His finale was American Pie. It brought the house down and brought in from the patio a group of 20-somethings to dance and to get everyone else dancing as well. Yes, good craic (meaning good company, good times)! 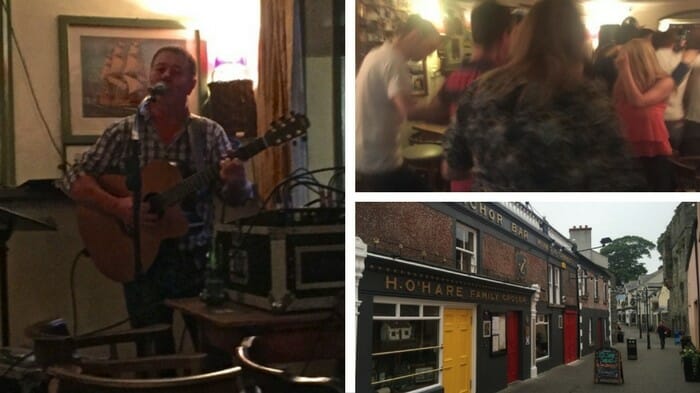 It's hard to take a picture of a party, but there was singing and dancing and all around good fun at PJ O'Hare's in Carlingford.

Trim Castle – This Anglo-Norman castle was built in the 12th century in the area known as the English Pale, a part of eastern Ireland under English control in the middle ages. It was a symbol of Norman strength. You now know the origin of the phrase, beyond the pale. Anything beyond the pale was Ireland. In true colonial fashion, the term evolved to mean “outside the bounds of acceptable behavior”. The castle was used in the making of the movie Braveheart. 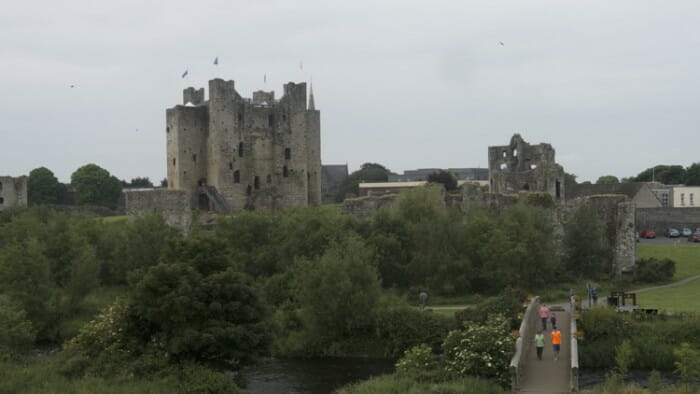 Trim Castle. Tours are available. When you go, ask about the toilets in the castle. It's a fascinating story.

I was on this trip thanks to the people at Tourism Ireland and the #IrelandsAncientEast blog trip, created and managed by iambassador. Naturally, Solo Traveler has full editorial control and all opinions are my own.