You are here: Home / Solo Travel Destinations / North America / Another Hiking Humiliation and Then… Redemption 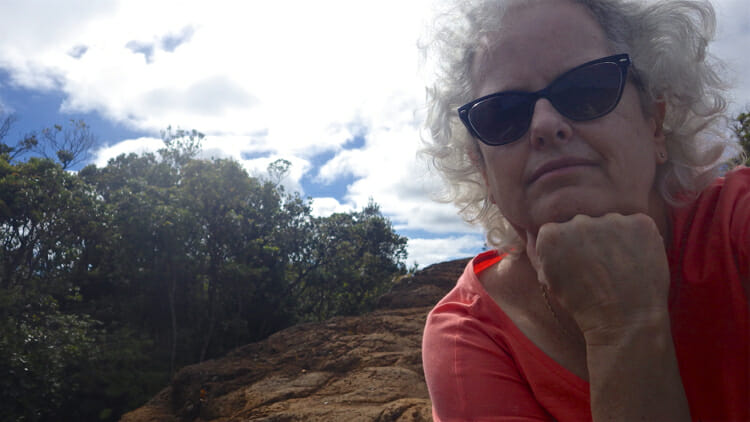 Discouraged by a trail without enough grip and reports of deep mud ahead, I sat down discouraged.

Now Hawaii. Or to be more precise, Kauai.

Should I just avoid places that start with “H”?

You can get an overview of a few of my hiking successes here.

You can read how Hong Kong took me down here.

This post is about solo hiking in Kauai. And I'm writing it (or starting it) on my phone about 200 yards past the trailhead, overlooking the Pacific Ocean, defeated by clay. 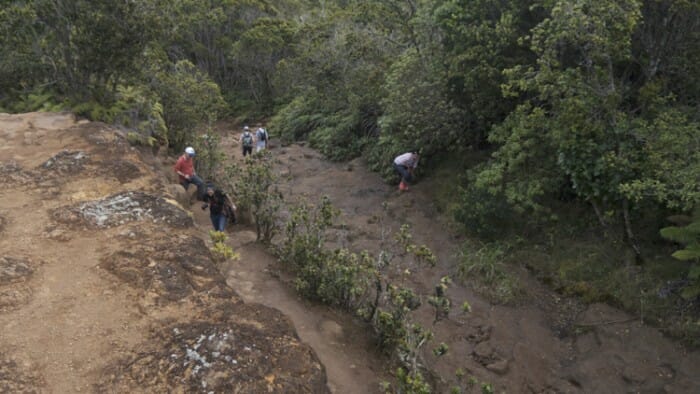 Alakai Swamp Trail begins at Pu‘u O Kila Lookout. The ground is covered in a clay and there are no real footholds – at least not that I was keen on. Plenty of people were doing the trail but I think terrain like this requires an approach similar to what you would do riding a bike. You have to move fairly quickly, loping from foot to foot. Being slow and nervous creates more opportunities to fall.

Solo Hiking in Kauai is Safe but Can Be Challenging

Solo hiking in Kauai is safe in terms of wild animals. The only potential problem is wild boars and I'm told they're inclined to stay away from you. They have no bears and no snakes. And every trail I was on has some people on it – not lots but enough that if something happened to you, a person would be by in about 10 minutes who could help.

The only danger I saw was clay.

Clay has a very different consistency than typical soil. It's slippery when wet. Very slippery. So when I was about 100 yards along the Alakai Swamp Trail (via the Pu‘u O Kila Lookout) and saw people leave the trail covered in mud, saw the wide path with no trees to grab onto and few footholds to grip, I gave up. I don't take chances with my left knee which is vulnerable due to an incident a few years back when I jumped off a cliff into a lake. (Believe me, it wasn't as stupid as it sounds but the results, unfortunately, are as bad.)

I turned back, sat on the cliff edge, looked out at the spectacular view, and wrote the introductory paragraphs you read above.

At least I had a spectacular view from where I sat, defeated before I had even started the trail.

After a while – after making sure that my decision to stop was final – I turned around and went back to my car. I would have to be content with seeing the canyon from the lookouts that hundreds, maybe thousands of people use every day. I drove back down Koke'e Road and stopped at the Museum and Lodge. There was a nature trail there. Why not? I thought. But it was short. It took five minutes. It was for kids whose parents wanted them to run off some steam.

Dejected, I continued down the highway, still looking for a way into this canyon beyond just standing and staring at it. I stopped at the Pu-u Hinahina Lookout.

I went further down the road to the Pu'u Hinahina Lookout and hiked the Waimea Canyon Trail to the Waipo'o waterfall. Well, almost. Not far from the falls, I again faced a wide trail with smooth, clay-covered rocks that didn't offer any footings. Not worth risking my knee. This photo was taken from the Lookout. The falls is where I almost got to.

At the lookout I saw a confusing sign (I didn't find the trails to be well marked in Kauai) for a variety of trails all leading from the same starting point. I decided I would try again despite the fact that I had not chosen this trail. I would turn back if necessary but I hoped I would reach the Waipo'o Falls.

I ventured into the trail which seemed more familiar to me. It was treed. And because of the trees the clay ground was peppered with twigs, stones and roots which provided a good grip on the trail. The hike to the falls is 4 miles round trip and considered to be moderately strenuous. I'd say that's a good description. There's a lot of up and down and on the down, it was frequently quite muddy.

On my first really slippery climb up, a man, shirtless, moving like a billy goat with two hiking sticks said to me “you'll need this” and passed me one stick without stopping. It was like he dropped out of the sky just to take care of me!

In the end, I had a good, long, satisfying hike – for my level of hiking. It was wonderful to be in the woods and experience, yes, a redemption. I came to hiking late in life so I don't have a natural confidence about it. But what confidence I lost on the Alakai Swamp Trail was restored on the Canyon Trail.

I didn't take many photos on the Canyon Trail but here are a few.

You can see the red clay but with the sticks, stones and roots, and the trees along the site, this made for a challenging hike albeit a safe one.

And just one of the spectacular views from the trail. That’s the real payoff for hiking beyond the Lookout. That white spot you see in the center of the picture is a plane. 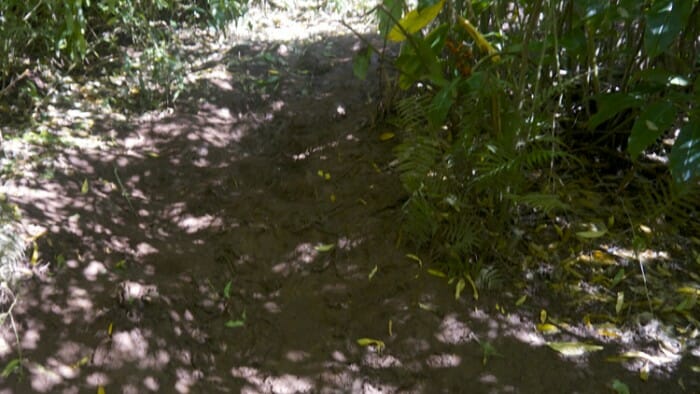 I hope you can see the clay mud – difficult if there was nothing to provide traction in it.