You are here: Home / Solo Travel Destinations / Europe / France / Rome and Paris in One Trip: Two of Europe’s Top Destinations 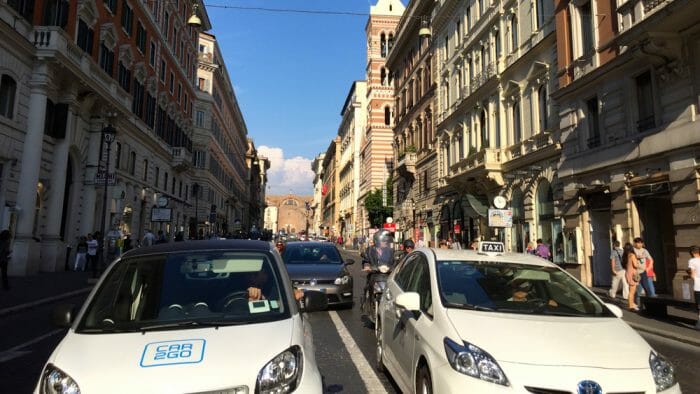 The streets of Rome.

Rome and Paris in one trip!

The romantic cities of Rome and Paris, the Eternal City and the City of Light, are two of Europe's hot spots.

They are rich in travel experiences but they can also be expensive, busy, and overwhelming.

In this post I want to give you my best advice on both cities plus your many options for travel between the two.

I have been to both Rome and Paris a number of times. On my most recent trip I went with Monograms Travel, a company that takes care of all the logistics and some of the planning for you. You can read what that experience was like in this post as well. But first, here's what you need to know to do these two great cities in one trip, completely solo. 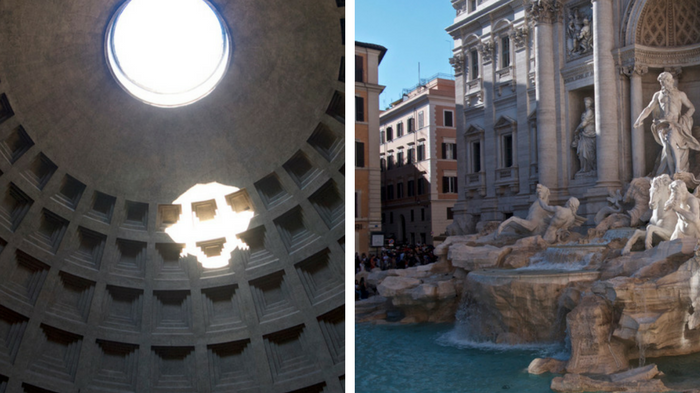 The Pantheon is on the left. It's an extraordinary building. It was an engineering feat when it was built in 27 BCE and it is so today. On the right is the Trevi Fountain. Go very early to try to avoid the crowds.

The Best Time to Go to Paris and Rome

Given that Paris and Rome are top destinations in Europe, they will be less busy and somewhat less expensive if you go during the shoulder season. This means April and May or late September to early November.

Rome and Paris during the Shoulder Seasons

Which City First: Rome or Paris?

Sometimes travel itineraries are affected by how easy the destinations are to navigate, how interesting each destination is, or how familiar the food is as sometimes people want to ease into new tastes. But Paris and Rome are not affected by these factors. They are well set for tourists, both are fascinating, and the food, well, it's incomparably delicious and familiar. So which city should you go to first? Here are my thoughts.

Whichever city you go to first, here's a basic itinerary. It's based on one week and my basic principle that you can't spend less than three nights in any location on a trip. If you have more time, spend it. There is so much to enjoy in both these cities beyond the major sights. Settle in. Relax and enjoy what the locals do. 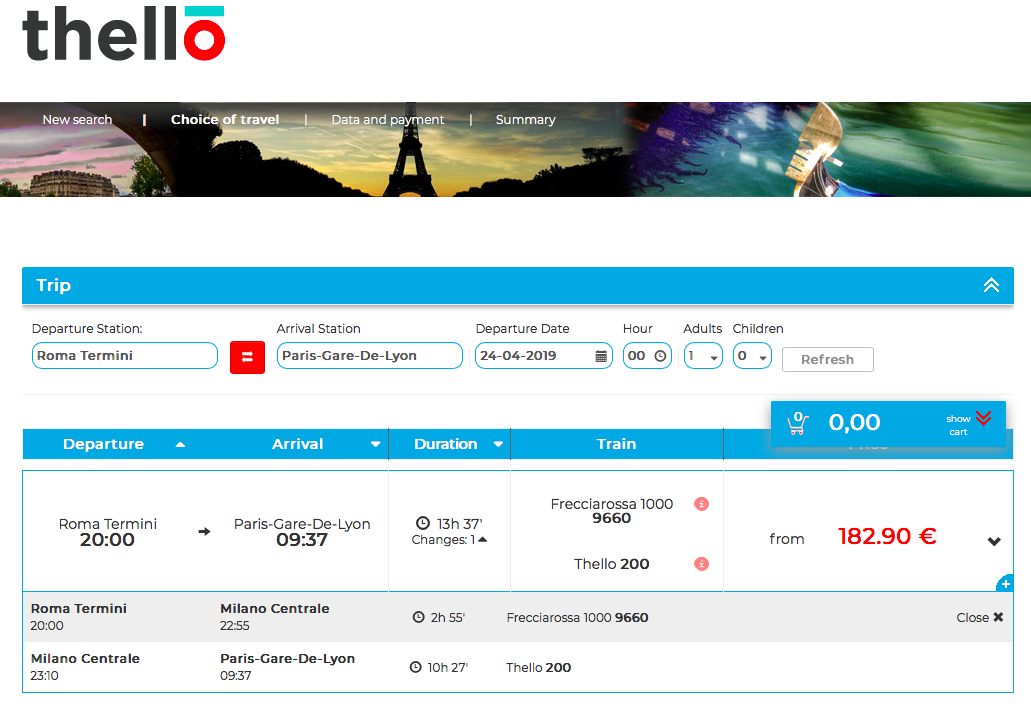 Thello is a train company that specializes in travel between Italy and France.

How to Travel Between Rome and Paris

There are 1,400 km between Paris and Rome. That's approximately 14 hours of driving. While it's a pretty spectacular drive, if you don't have much time on your trip, there are better options to get between the two cities. 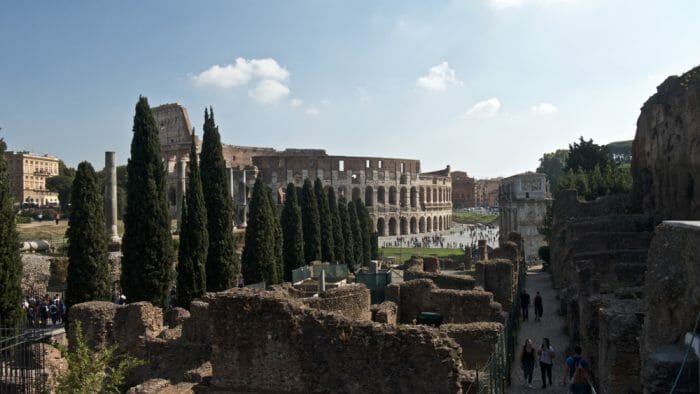 Our city tour focused on the Vatican and ancient Rome, both challenging to see without a tour guide due to the crowds. This is a view of the Coliseum from the Palatine Hill.

The Best of Rome: Accommodation, What to Do

I went to Rome in 2002 when traveling with my family. I thought I'd done it. I'd seen the major sites, I had them in my mind. Done. Dusted. On to the next destination.

But, no. Rome solo is completely different. I fell in love with Rome. My breath was taken away at every turn. It is, indeed, the eternal city for it's layered in almost 3,000 years of history. This history is shown in its ancient Roman, Romanesque, Renaissance, Baroque, Neoclassical, and even Fascist architecture.

Unlike Paris where there is a uniformity to the city thanks to Napoleon III and his urban planner Georges-Eugene Haussmann’s plan of the late 19th century, in Rome one style of architecture butts up against another in the most surprising ways. Rome's social, political, and military history is evident through its buildings, everywhere you look. It's spectacular. My reaction to this city was visceral.

Where to Stay in Rome

Where I stayed: StarsHotel Metropole is a very central, full-service hotel with spacious rooms that are more like North America than Europe. From this location I walked everywhere and saw all the major sites of the city. If you don't love walking like I do, this central location means getting around by transit or taxis is cheaper. The restaurant serves both Roman cuisine and a range of international dishes, all prepared with products by Eataly. The breakfast buffet is great.

What to Do in Rome 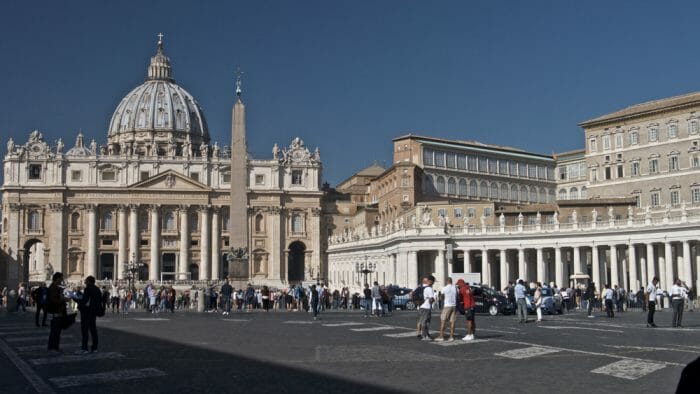 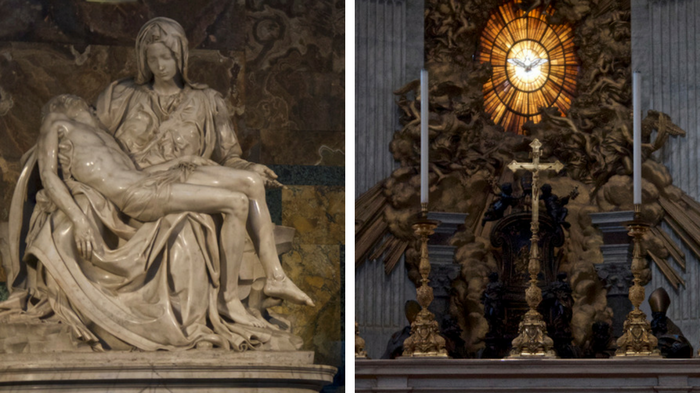 Michelangelo's Pietà on the left and the altar of St. Peter's Basilica on the right 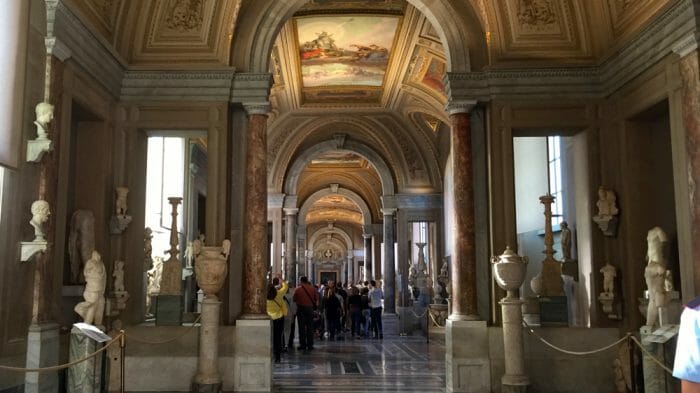 The Vatican Museum. If you're not going on a tour, it's highly recommended that you buy a “Skip the Line” ticket. 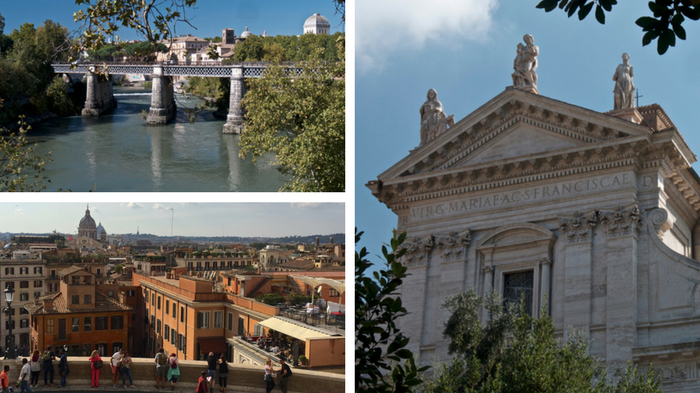 Views of Rome: The Tiber River (upper left), the Santa Francesca Romana church from the 10th Century (right) and the view from the Trinità dei Monti church at the top of the Spanish Steps (left). 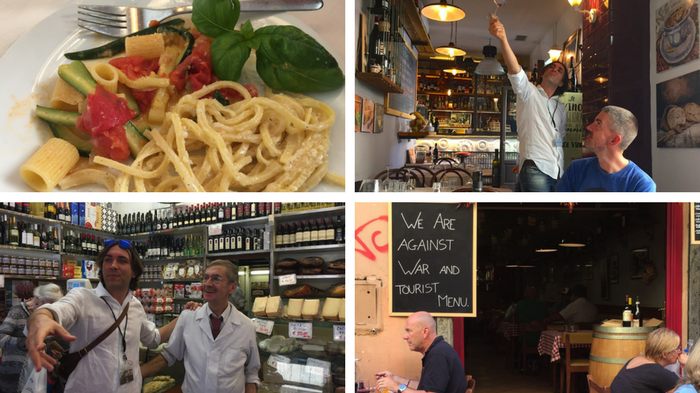 Finding real Roman food on the Trastevere for Foodies tour by Eating Italy. The dynamic fellow looking at the wine was our guide, Luca. 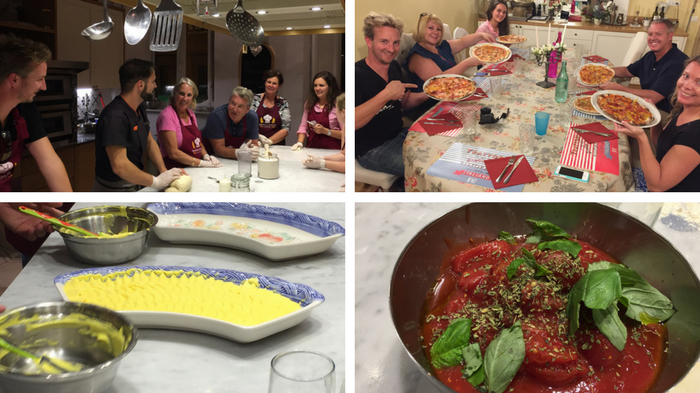 Enjoy the Best of Paris: Accommodation, What to Do

I've always thought that Paris was called the City of Light due to how the streets, monuments, and towers are illuminated at night.

It turns out I was half right. It is attributed to the fact that it was one of the first European cities to adopt gas street lighting. Doing so was part of Haussmann's renovation of Paris between 1853 and 1870, which resulted in that uniformity of architecture that I mentioned above. It is also because of the city's leading role during the Age of Enlightenment.

Where to Stay in Paris

Where I stayed: Hôtel L’Echiquier Opéra Paris is a Sofitel property on a side street away from the crowds and noise but close to Paris' highlights. It's also just a couple of blocks from the bustling Montorgueil quarter where Parisians really live. It's a full service hotel built in the 1850's and decorated in a beautiful belle epoque style. It has a birdcage lift going up the center of a circular staircase. It's a real treat! Book it here.

What to Do in Paris 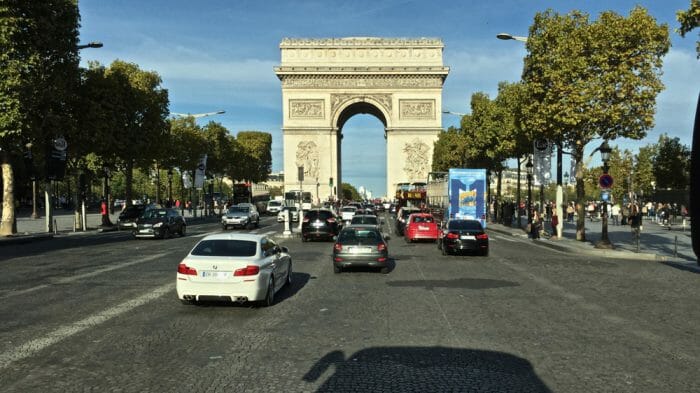 Driving down the Champs-Élysées approaching The Arc de Triomphe 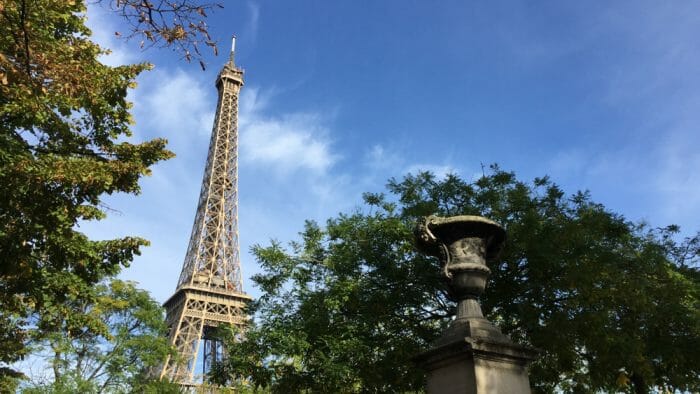 As if I have to tell you, this is the Eiffel Tower. 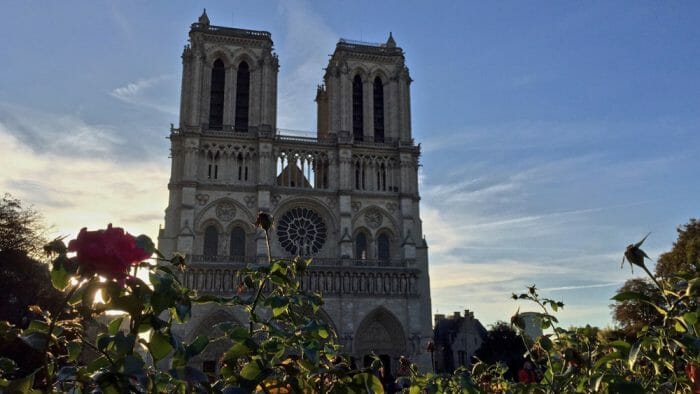 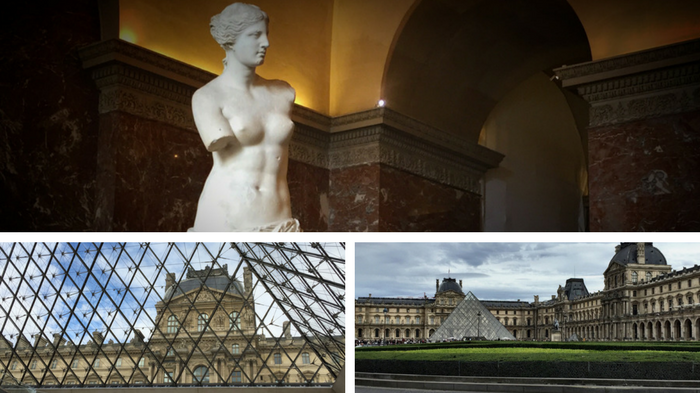 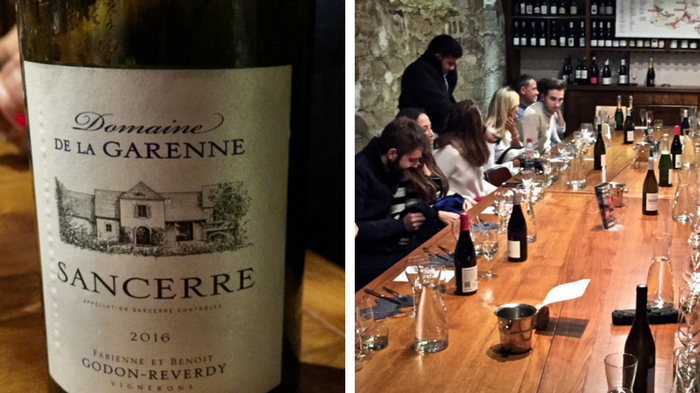 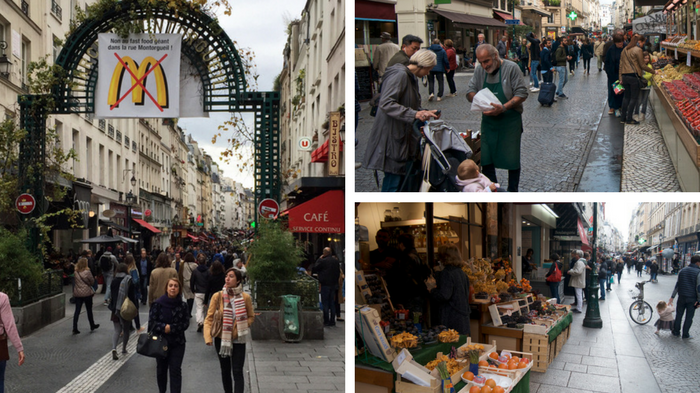 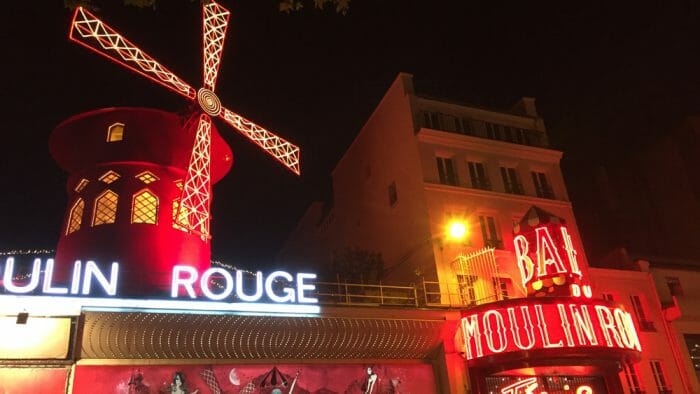 I attended a performance of the Moulin Rouge. It was as I expected. Kitschy, fun, and made for tourists.

Paris and Rome the Easy Way

On one trip to both cities I went with Monograms Travel , a company that is part way between a travel agent and a tour company. They give you an independent experience but relieve you of the tedious aspects of travel.

I arrived in Rome first and was met at the airport by a woman with a sign. I've always envied those people who get picked up outside arrivals and this time I was one of them. She passed me off to a driver who took me to my hotel, pointing out major sights along the way.

At the hotel, I was met by Monograms' local host. She outlined what activities I had confirmed for the next few days and what she would recommend for my time that was not booked. That evening, there was a welcome reception for Monograms travelers. This is an opportunity for all to learn more about their plans while in the city and ask questions. For solo travelers, it's a chance to socialize a bit.

This is the essence of a Monograms trip, a lot of hand holding and, at the same time, a lot of freedom. I took this trip as a guest of Monograms to experience their un-tour concept.

Monograms and the Single Supplement

What about the single supplement? Let's deal with this directly because, as solo travelers, we are all concerned about it. They have a supplement and it's higher than our usual threshold of 20%. However, there are two things that make me comfortable with this. The level of service is exceptional and very personal so the value is well beyond just a room to yourself. There is also the pick-up and drop-off at the airport, the local host who is available to you at all times, even by phone in the evening, and the planning that is done for you without the need to follow a group around. The challenge of independent travel is always in the planning, scheduling, and the transitions and they have this sorted for you.

The Monograms experience is luxurious by my standards. They help with the planning. You can avoid all that hunting on booking.com trying to find the right hotel, location, and price; they take care of it for you. By working with just a few hotels they can exercise buying power and get you more for less. Then there's also the challenge of choosing the right city tour, wine tasting, or cooking class. They take care of this as well by vetting excursions so you can just choose what you want to do, not what tour company you want to do it with. And then there are the transitions. Pick-ups and drop-offs make those easy. Bottom line: I was impressed. 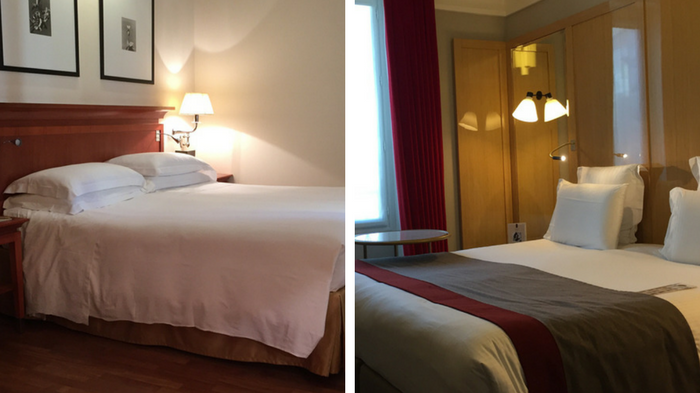 My trip with Monograms Travel was a project managed by iambassador. Of course, Solo Traveler maintains full editorial control of the content published on this site.